fabulous time at home.. Re-do's In the Garden.. 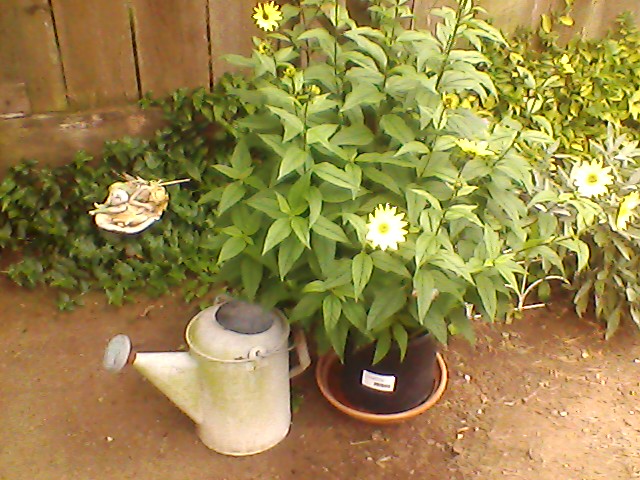 Of course I spent my time at home in my Garden cleaning up for fall, got rid of all the debree and planted some last time flowers.. for a little more color until winter comes about.. I was suppose to come back to Mom's and didn't I told them later on I was spending the night in my own bed...it's been a month since I have slept at home.. a going home for a few hours wasn't getting it.. besides my dog needed some time with me and I her and more birdies as well.. I just before I went home I stopped once again at the nursery they still had plants for 1.79 so I picked up a few more Marigolds and pansy's etc.. O and the picture is the new daisy like plant I bought the other day.. I thought they were black eye susans but the man said no and like usual I don't remember the name.. 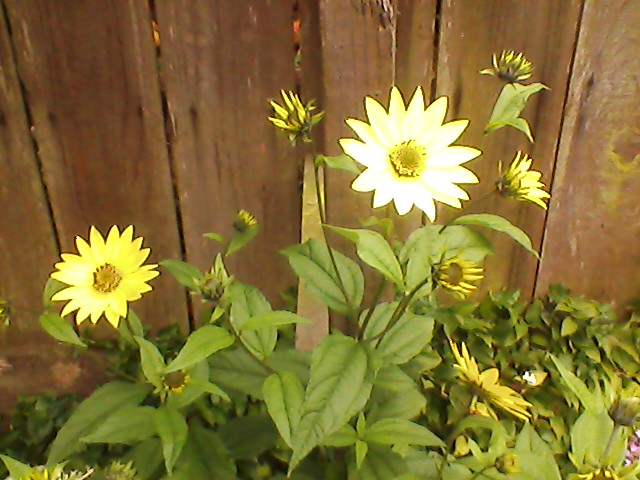 I tried to get a better photo but couldn't because of the light.. but they are yellow with some small amounts of black inside them.. 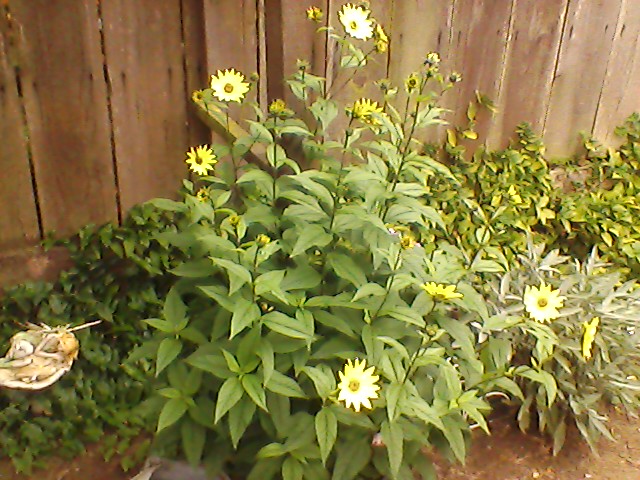 I re-planted this pot with a pansy and forget me knots... 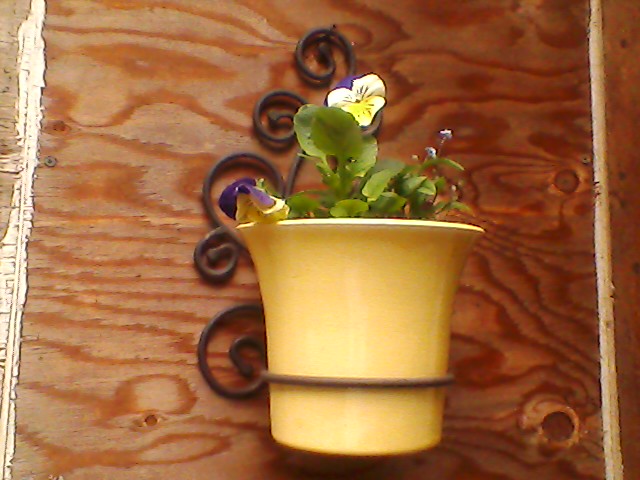 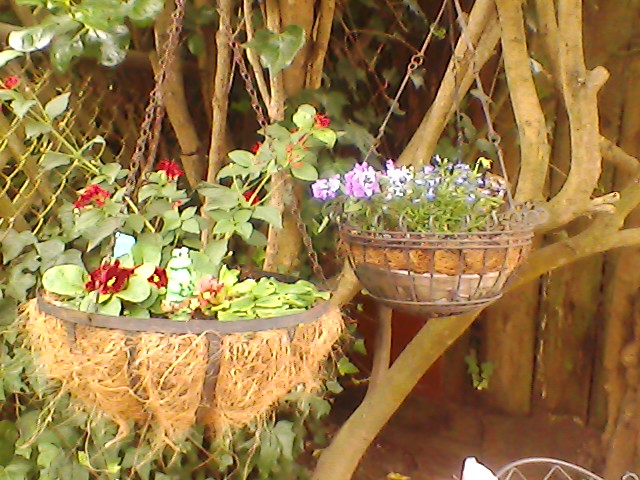 and re- hung these two baskets in the back under the tree.. where I often sit.. 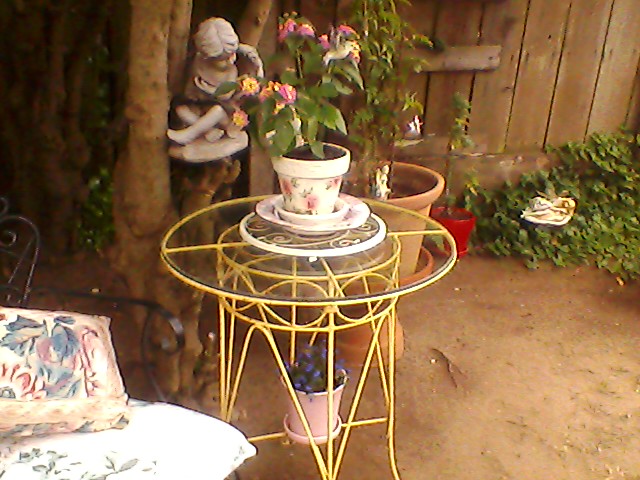 No table cloth, the weather had been so misty wet.. and I don't want to ruin any.. so bare table for now.. Still have the pillow out though.. but before I left today I removed them cause maybe rain will come who knows.. It's my new ones so I didn't want to take any chances with them either.. 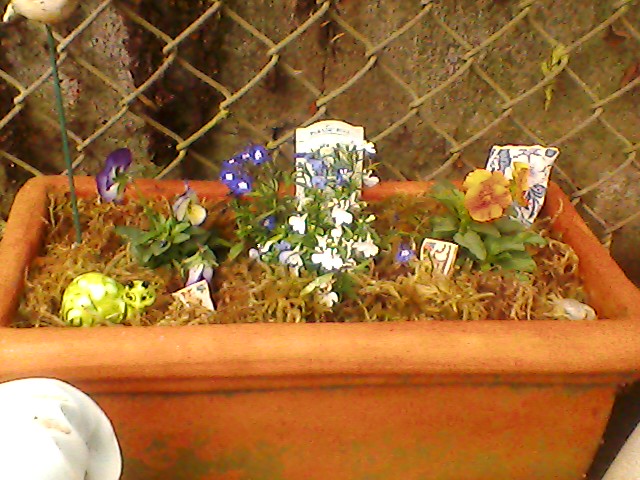 Also re did this planter too, with some different pansy's I love pansy's a lot as you can tell.. with some Lobelia  which I love as well.. they have six packs with mixed colors in one pouch.. very pretty...I added some green moss to it and a few pieces of broken plate.. 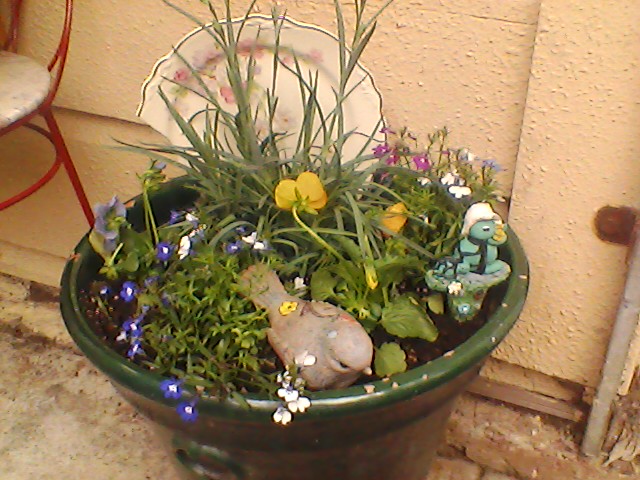 A re-do as well it had a old tired plant in it for about five years now.. So I thought I cut a piece put it in the Garden some where and put some new plants this sits by my back door.. Some pink carnations little ones... which I barely see these day.. I used to plant them by seeds all the time and I really haven't seen plants or seeds..wonder why.. the seeds that I did have wouldn't sprout .. My little red birdie is fading from the sun.. so sad.. I wonder if I could re paint her..humm I will have to look it to that...O and I stuck that Homer laughlin plate that Vee broke in there to .. It has pink flowers on it.. 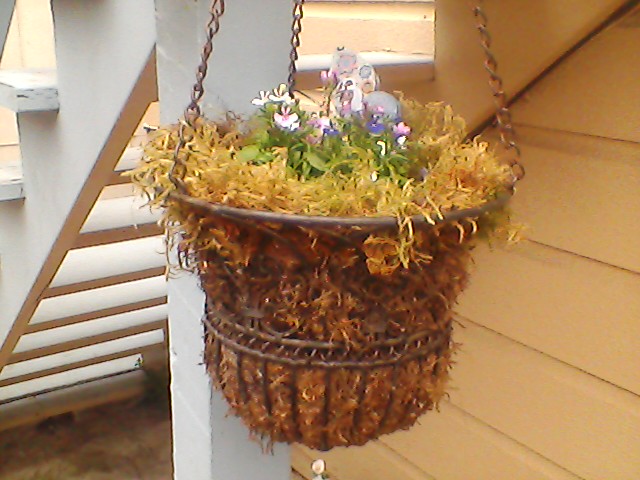 This needed a re-do too, the birds had torn all the moss out of it pretty much and it also looked old and tired. I love this wrought Iron basket.. just put some Lobelia in here to and a pansy.. with a butterfly statue.. 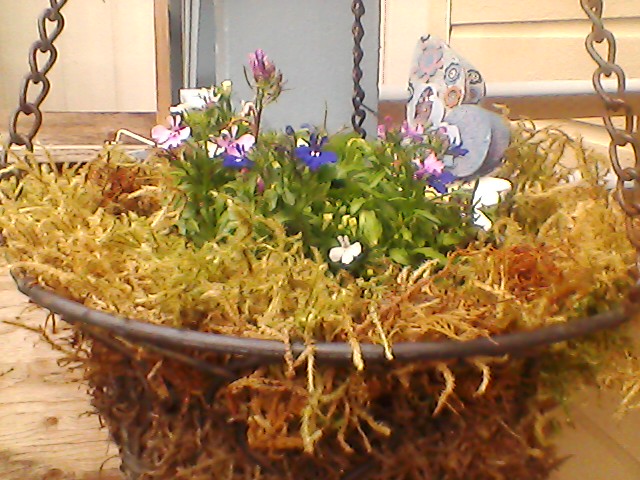 The Royal Albert April tea cup that Jesse broke on me.. I glued some of it and used a safety pin to attach it to the change.. 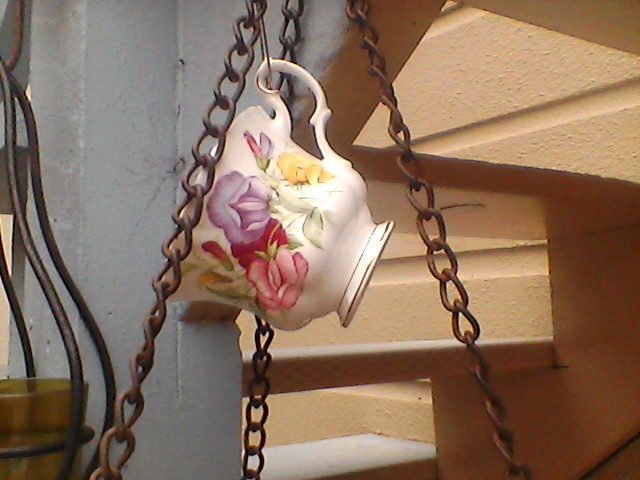 The new Garden got tore up by bugs.. I haven't a clue why.. but there is a small orange tree next to it.. and I have noticed that it is sick, It has black stuff all over the leaves and I was wondering today if this is the reason why my new Garden died they had these black bugs all over everything and it killed all my plants? Well I took it all out except for the tomato plant it actually has some cherry tomatoes on it.. And I planted some flowers at the edge.. 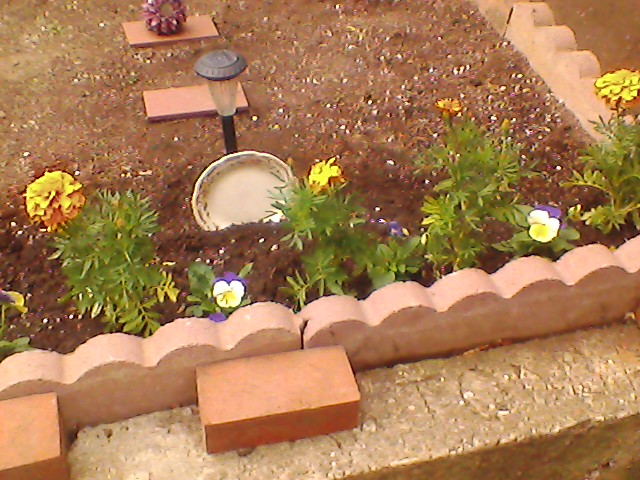 Just some Orange and Yellow Marigolds and  Yellow and Purple Pansy's...


* Then came the re-do once again of the Blue Garden.. I cut the Gladiolus out and I had bought some Blue Forget Me knots... and put one in the coffee pot.. 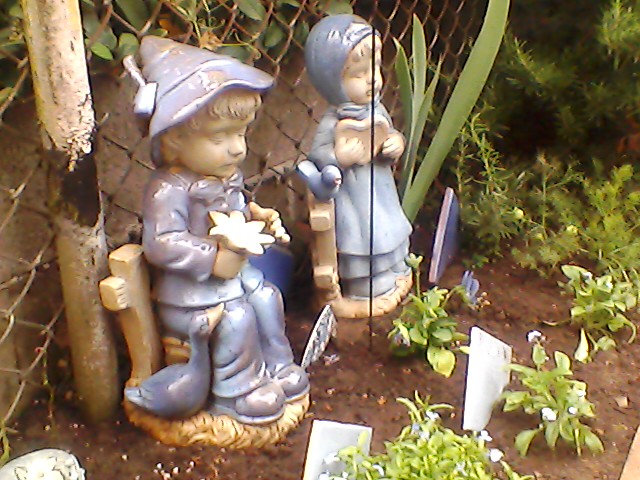 
Hopefully it will grow a little bit My Morning glories took this time so but next spring they hopefull will grow out nicely.. I have never found Forget me Knots at the nursey at least I never seen them.. but I'm glad this time I found them for the blue Garden.. 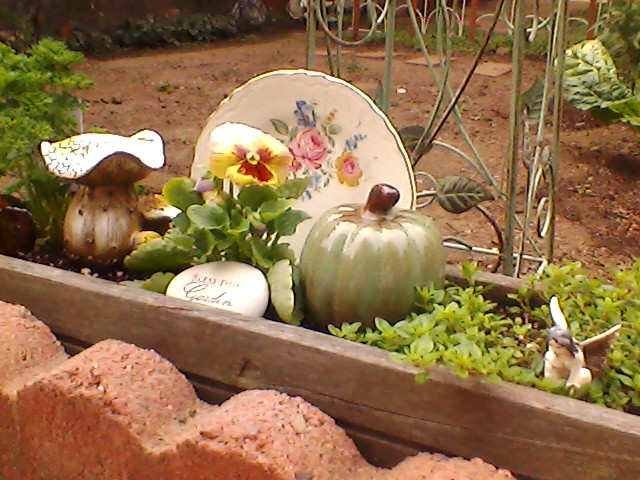 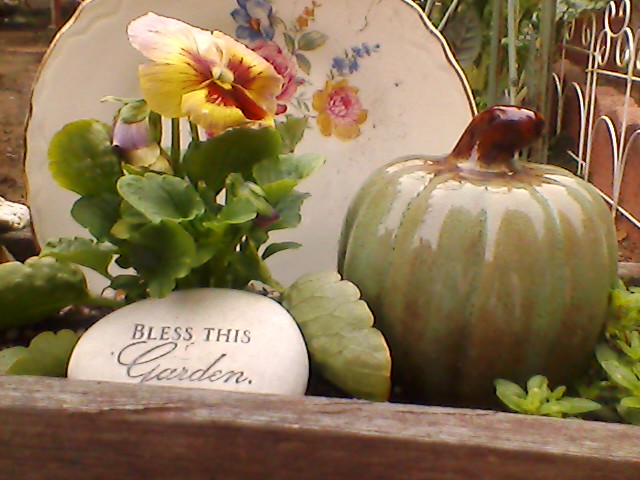 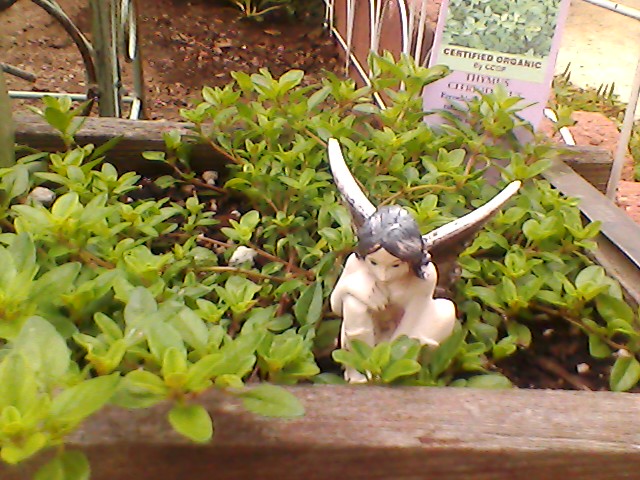 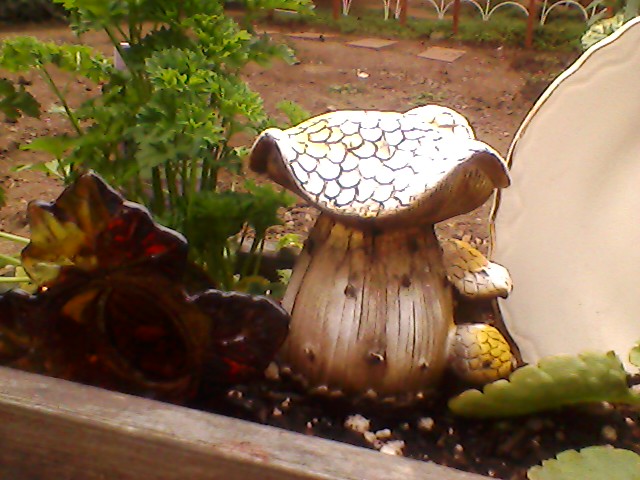 ** The End to a perfect day in the Garden.. and cuffy nite sleep in my fluffy bed.. with ms Sweetpea...Was so sad it had to end and I had to return but I'm grateful to my niece for giving me a break and cleaning the deck off.. One thing off the list of things to do... ** Thank you Julie....... 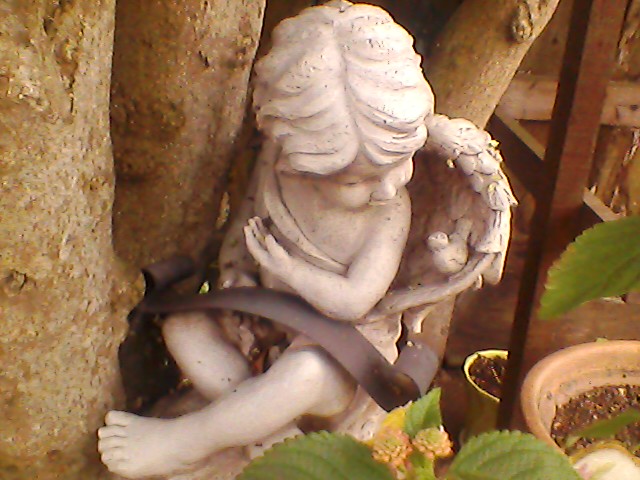 And wishing you all a lovely evening and a fabulous new week.. with love Janice