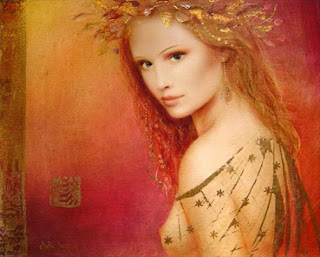 WELL GOOD MORNING MY DEARS... OF COURSE I HAVE BEEN SURFING THE WEB BECAUSE I WANTED TO LOOK FOR CHRISTMAS COOKIE RECIPES, I WAS THINKING OF ALL THE COOKIES THAT MY SECOND ITALIAN MOM USED TO MAKE. AND I WISHED I HAD GOTTEN THE RECIPES BUT I WAS ONLY 13 AND DIDN'T REALIZE HOW I WOULD WANT THEM LATER... I KNOW IT'S A LITTLE BIT TO EARLY BUT IT'S NOT REALLY ... IT'S JUST DAYS AWAY...WELL I ENDED UP FINDING MORE THAN I WAS LOOKING FOR. JUST FOUND SOME MOST LOVELY RECIPES TO TRY...ANY WAY'S I THOUGHT I'D START WITH THIS BECAUSE IT IS AUTUMN STILL...SOMETHING FOR NOW... I WILL SHARE THE CHRISTMAS THINGS AND OTHERS LATER... 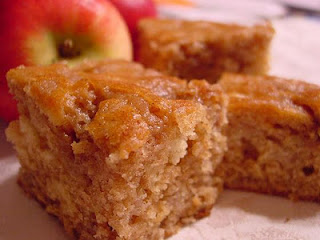 Pre-heat oven to 350 degrees.
In a saute pan, melt butter and cook apples about 10 minutes until they start to brown. As they cook, add in the brandy, 1 Tbsp. of sugar, and cinnamon. Stir to mix then set aside when cooked.
In a mixing bowl, cream the remaining sugar and the yogurt.
Blend in the flour and baking soda and mix until smooth.
Beat in the oil and eggs.
Stir in the apple mixture, blending until the batter is smooth and consistent.
Pour into either a non-stick or greased regular 9" x 13" baking pan. (The original recipe called for 1 8" round, but this would have completely overflowed. The larger pan allowed for less cooking time and nice sized squares. A bundt pan would also work well.)
If using optional crumble topping, make this in a separate bowl. Mix together all ingredients using either a fork or your hands to blend. (I use my hands- it is easier to mix it and then sprinkle it on top that way.) When blended, crumble topping randomly over the batter, trying to drop only small bits at a time.
Bake cake for about 30-40 minutes until a toothpick inserted in the middle comes out clean. Allow to cool for a little bit before serving. 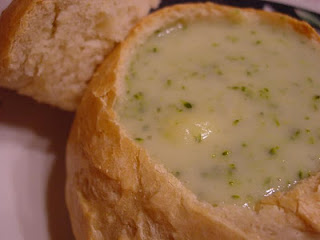 I ALWAYS WANTED TO DO THIS...MAKE BROCCOLI SOUP.. SO THIS LOOKED SIMPLE AND SOUNDED GOOD FOR A COLD CRISP DAY LATER HAVING THE APPLE CAKE FOR DESERT..WHAT DO YOU THINK??? AND MAKING YOUR OWN BREAD BOWLS I THOUGHT WAS NEAT ...
RECIPE AS FOLLOWS FOR BOTH:
Potato & Broccoli Soup
Modified from Cooking Light


In a small bowl, whisk together flour and about 1/2 C. broth. This will be used later to thicken the soup.
In a large stockpot, saute the onion in a small amount of olive oil or butter until soft.
Add in remaining broth, potatoes, and broccoli. Bring to a nice simmer and cook uncovered for about 10 minutes until potatoes are tender. Cover and simmer another 10 minutes.
Pour in flour mixture and stir in. Continue to stir over medium-high heat until soup thickens.
Pour in milk and half & half, stirring to mix. Cook over medium heat to warm through.
Finally, just before serving, add in cheese and stir until melted. Serve hot.


In a warmed mixing bowl, pour in warm water. Add in yeast and stir. Allow to sit for about 5-10 minutes.
To bowl, add in about 2 1/2 C. flour, salt, and oil. Mix with dough hook until dough starts to come together.
Continue to add in flour in small amounts until the dough has become a solid, non-sticky ball. You should use most, if not all, of the flour.
Knead with dough hook on a low speed for about 3 minutes. When finished, remove dough and place it in a medium bowl that has been greased. Rotate the ball so the top is greased, then cover and let rise in a draft free location for about an hour. The dough will rise to more than double it's original size.
After dough has risen, punch it down. On a cookie sheet, sprinkle the cornmeal evenly. Shape the dough into 4 balls, about 4" in diameter each. Place dough balls onto cookie sheet with some distance between them. Allow to rise a second time in a draft free location for about 30-45 minutes.
Heat oven to 400 degrees. Mix together the egg white and Tablespoon water. Brush dough balls with egg wash and bake for 15 minutes in the heated oven.
Remove the bowls after 15 minutes and apply the egg wash again. Return to oven and bake another 10-15 minutes until crust is golden brown.
Remove from oven and move to a cooling rack. When they are able to be handled, cut an opening in the top of the loaf, about a 3" circle. Carefully remove the plug, keeping as much bread as possible attached. Using either a spoon or knife, carefully remove insides, leaving a 1/2" between the outside crust and soft interior wall. Don't poke holes- your soup will leak!
Ladle in hot soup and serve with the plug on the side or on top of the soup to keep it warm. 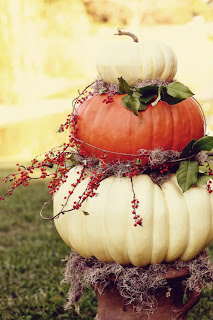 HAVE A LOVELY AUTUMN DAY TODAY...WITH LOVE JANICE.
P.S. MOM VISIT WENT WELL AT THE DIABETIC CENTER AND WE HAD A LOVELY DAY TOGETHER FOUND A GREAT CHEAP SANDWICH SHOP AND VISIT THE GOOD WILL STORE FOUND SOME LOVELY THINGS WILL SHARE LATER...HUGS
Posted by janice15 at 8:50 AM 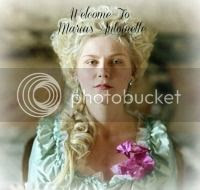 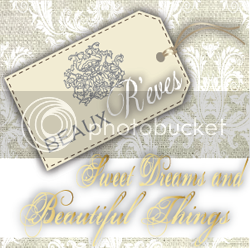 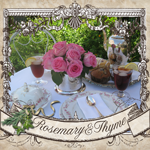 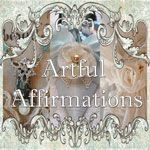